The History of Freelance: A Modern Evolution or Old Concept? 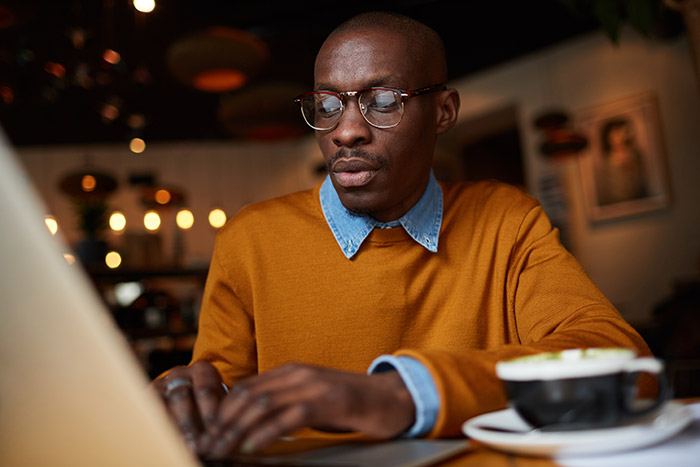 Vandelay Design may receive compensation from companies, products, and services covered on our site. For more details, please refer to our Disclosure page.

What comes to your mind when you hear the word “freelancing”?  Maybe you think internet, laptop, or even smartphone. And why wouldn’t you? In the utility belt of a 21st-century freelancer, these are the tools. In fact, digitalization empowered the world of freelancing, and we’re pretty big fans of that. (Can you tell?)

But what is the history of freelancing? When did freelancing start? Is it a relatively new concept of the internet age, or is freelancing’s origin much older?

Today, the work-from-home movement is incredibly popular, especially due to the pandemic and changes that were forced on many companies. However, even before the pandemic, freelancing was on pace to account for a majority of the U.S. workforce by 2027, according to a study done by Upwork.

The internet obviously has had a huge impact on freelancing and remote work. You may be wondering if the freelancing concept started from the internet.

If you find yourself wondering about the history of freelancing, it turns out “freelance” is a pretty old word—way older than “internet.” (Does that mean our grandparents could have been freelancers? Because that’s weird.)

The History of Freelancing

Let’s start with the etymology. The word “free” comes from Germanic origin and means “to love.” Duh—who doesn’t love freedom? Even more interesting is the latter half of the word. The “lance” part of “freelance” has French origin and means to hurl, throw, or discharge with force. (You read that right. You’re free to hurl stuff at your clients from hell, and you’ll love doing it. Just kidding. Don’t actually do that.)

If you are trying to uncover the meaning of the combined words, you may find a number of online definitions. One interpretation explained “to freelance” means the person discharges the force of his skills into work he loves. Another freelance definition implied that the person enjoys doing the work before hurling it in front of the audience.

Personally, I like the first version. For the purpose of this exercise, we’re going to say our definition is this; we throw as much as possible—our strongest efforts—into the work we enjoy.

The Origin and Evolution of Freelancing

“Freelancing.” Okay, so it’s an old word, probably related to the emergence of printed magazines, right? Actually, as we dug into the origin of this little word, we found it goes back even further. To our surprise, freelancing was an old existing concept that dates back a few hundred years.

The oldest reference to the word “freelance” dates back to the early 19th century. The word first appeared in The Life and Times of Hugh Miller by Thomas N. Brown (1809). Later in 1820, Sir Walter Scott mentioned it in his book, Ivanhoe, written in 1819. Here is how it was used in the book: “I offered Richard the service of my Free Lances, and he refused them—I will lead them to Hull, seize on shipping, and embark for Flanders; thanks to the bustling times, a man of action will always find employment.”

To explain what Walter Scott implied by this word, we should give a short historical background. In the Middle Ages, there were 2 types of soldiers, those working for a king and those working for whomever paid. Thus, free lancers were independent mercenary soldiers who sold their skills.

As years (and centuries) passed, the word overpassed the military field and found a prominent place in the business sector. However, there were no major changes in meaning —we still compete in the market, sell our work to various businesses, and in return, we get paid.

As the internet became inseparable from our daily lives, freelancing found a place living inside computer monitors. People began looking for clients and working on a project-by-project basis. A number of professionals began taking advantage of the opportunities available, and now virtually anyone can become a freelancer.

And that’s kind of amazing. After all, the internet has allowed people to set up shop digitally. You can present your portfolio website with the click of a button; you can find professionals through a single Google search. The internet has helped freelancers to emerge and thrive.

So what is freelancing today? While there are numerous definitions, Cambridge defines it as follows: “Doing particular pieces of work for different organizations, rather than working all the time for a single organization.”

The Oxford definition is almost the same: “Self-employed and hired to work for different companies on particular assignments.”

Thus, there is no single king (employer) whom we serve but rather a number of businesses with which we can work. In layman’s terms, the contract is non-exclusive, and you choose your gigs.

In recent years, other connotations emerged regarding this word, including stigmas. Some clients perceived freelancers as lazy professionals who would provide cheap work. In reaction, many designers began replacing the word “freelancer” with “design consultant,” “independent designer,” etc. Additionally, many freelancers are “design firm owners” by online persona. (We showed them!)

No matter the title, freelancing is spreading inside all sectors; it’s an international movement.

“Freelancing” has also become synonymous with working remotely. (Don’t want to work “from home?” Why not replace home with a coworking space?)

Coworking spaces have become popular in the industry. Now freelancers can enjoy the company of other self-employed professionals without a boss.

Why Should I Freelance?

If you aren’t freelancing along with your job, we recommend getting out of your comfort zone and joining the movement. Here is why freelancing is worth it:

Interested in giving it a try? Grab your laptop now, build your “design studio,” and choose the right “king” to work for!

If you’re curious about the popularity of freelancing or where it’s heading, here are some stats that you’re sure to find interesting: